It’s the start of 2022, and so far it doesn’t seem like anyone’s loving it. We’re not as immediately repulsed with this year as we were in 2020 or 2021. Somehow not too many horrific things have happened, and honestly that’s sort of a relief, considering the last couple of years we’ve had a World War III scare to keep things exciting as soon as January began.

We started off the year with the typical New Year’s memes that we see all the time: “New year new me” stuff that we all joke about and will never actually take to heart. The ironic part is every new year we start off with the same exact memes, which is about as close to a “new me” you can expect from the internet, but this year we had some new additions, and they were pretty weird ones. Are we happy that it’s finally 2022? That’s debatable. But do we have some new memes to discuss and joke about for the start of the new year? As always, of course we do. Humor can be found in the darkest of places.

The deaths of Betty White and Bob Saget were horrible ways to start the year. So honestly, those memes were just pretty dark, and despite some resurgences in memes and clips from their TV shows going around, we weren’t laughing. Instead, we were haunted by repetitive TikTok challenges like “River Deep, Mountain High,” where you basically just swing your arms back and forth while you speedwalk as a Glee song plays in the background. For a second, it gave me a glimmer of hope that I’d awoken in 2013. Tragically, this was not the case, and we’ll all live out the rest of our days in a plague-filled post-apocalyptic hellscape instead.

Wordle became a huge meme in January. Why? Does anyone know? If you do, then please explain it to me. Wordle is the new word guessing game that everyone is somehow extremely passionate about, passionate to the point where they won’t’ shut up about it. By the excitement and frenzy spreading across the online gaming community, you’d think a huge company just released a long-anticipated videogame to play on our nonexistent PS5s. But no. We don’t get that. We get Wordle instead. But at least Euphoria season 2 came out, so now we had some great Euphoria high school memes to get us through this weak couple of weeks of memes.

In what’s possibly the most unexpected meme of 2022, something strange started brewing over at the M&M’s headquarters. Someone transformed into that image of Steve Buscemi with a skateboard and decided the company needs to be more caught up with the times. Thus, they created “more inclusive” M&Ms. I am, of course, referring to the M&M’s characters, who literally eat other M&Ms in horrible acts of cannibalism and have no known personalities themselves. While other forms of media are making an effort to be more inclusive, and we can respect that, I have never met a single person who cares even in the slightest about the gender identity of the green M&M. It’s just not something that has ever mattered, matters now, or will matter at any point in the future. I genuinely believe this advertising attempt was thought of by an AI that watched too many Disney Channel original movies. 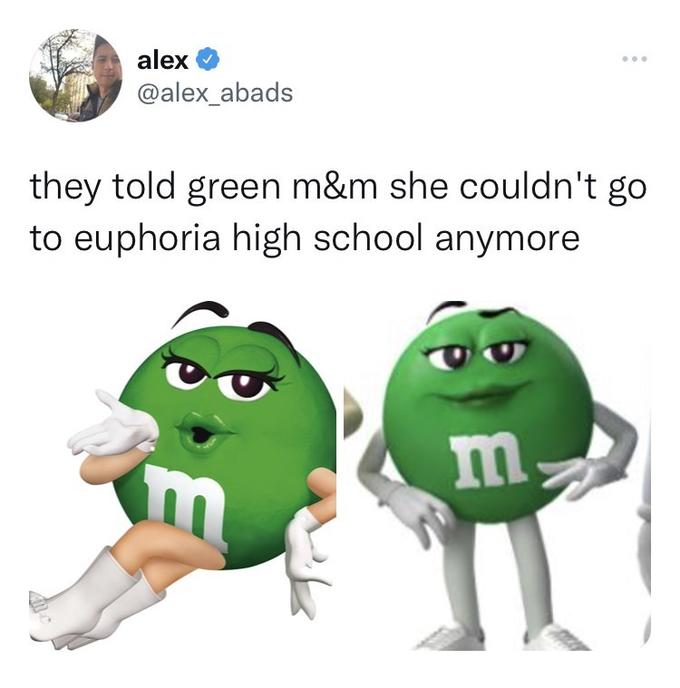 Lastly, in a move that surprised no one but still frustrated 98% of all people on Earth, NFTs gained a lot of popularity in early 2022. One collector claimed all his Bored Ape NFTs were stolen from his crypto wallet by a hacker, sadly proclaiming “All my apes gone” on Twitter, where he was met with far more ridicule than sympathy. We can’t help but find this hilarious. In an era where we’re all dealing with tragedy and insufferable stress, we got to watch a guy lose the pictures he bought online for probably hundreds of thousands of dollars worth of Ethereum. He could have just screenshotted them and called it a day. Maybe the drama of this NFT situation forbodes something more annoying to come in 2022. Or maybe someone will steal all the Bored Apes and put us out of our misery. Either way, we’re feeling a little anxious about what this year has to offer after seeing what January left us with.

Meme Insider is a Know Your Meme publication and the world’s leading internet culture magazine. Find out how to get your first print copy for free, and check out the Meme Insider website for more info.

Facebook Pulls Fake Accounts From China That Posed as Americans